THE POWER OF CIRCULAR THINKING: "Dungeons" are best organized as loops.

I think, at a basic level, the single best thing a person can do to create interesting dungeons is design them in loops. In part, because it provides for an immediate choice: left or right, red door or blue door, wide rotting rope bridge or thin natural rock bridge? And choice is at the heart of exploration.

Jennell Jaquays seemed to understand this very intuitively and her technique is covered very extensively by The Alexandrian in a post describing such. Loops are used with nested dungeons, vertical paths, incomplete paths etc to create dungeons interesting to explore. Even if there were no monsters, the connections in the Dark Tower promote curiosity as do the ones in Caverns of Thracia.

A more recent concise statement of the power of loops in dungeon design was pointed out by Questing Beast in an article discussing how the Rogue-like game, Unexplored, improved their procedural generation via loops. The image below is from the article.

A lot of the examples in the above image would make solid D&D predicaments: Do we go left or right? Do we risk traps or monsters? What does our (hopefully rolled randomly) party composition provide for-- can we take the obvious shorter but dangerous route? Choice is at the center of these questions. Loops make it easy.

Dyson Logos recent post one of his community-funded maps The Gardens of the Absent City. Now its a pretty great dungeon from the beginning because of the pillared hallway to the far left and the gardens and lake to the far right. But what you can subconsciously detect right away is its got a lot of loops.

Looking at the article above and thinking of major and minor nodes, I feel like there are about 8 major nodes and ~4 minor ones. This combines to make several large and small loops in the dungeon. The map feels interesting to explore because few single routes allow you to see everything- you have to choose. However, the players will end up at a familiar spot allowing more educated planning to attack the next loop- choice again only rewarded with more information. 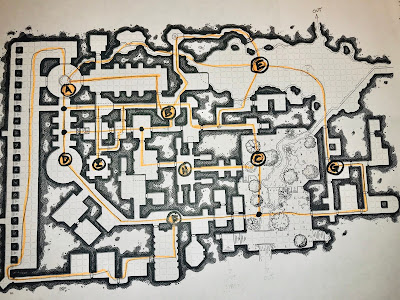 This can be enhanced by adding themed nodes in some manner. Maybe by obstacle type as in the Unexplored image above or by the environment. With that additional layering, loops become even more enticing to explore because they cross several of these themes. In Dyson's map, that might be temple (A), lake (E), garden (C), crypts (F), back to the temple (A).

A DM could also connection points to extend a theme from one area into another which create a unique setup but also alerts the players to the presence of loops. For instance "E" is a lake/water in the environment. While "A", "B", and "D" nodes kinda look, to me, like a temple with a well linking "A" to "E". So what if you have a lot of fire god statues, but a lot of water monsters walking around. This is interesting because it is unexpected and it alerts players to a potential alternative path in "A" other than the four doors they see. 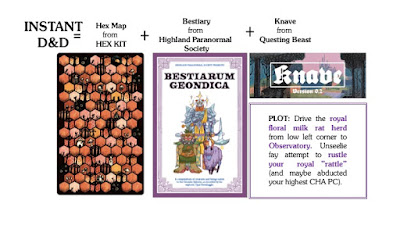