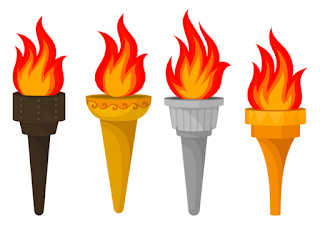 The Problem: Generally drawing a dungeon map as you go only to the extent of the light source radius is a pain. And other players tracking who has the torch is "meh" as well. Most players don't like to track torches or give up a weapon or shield. The actual benefits of using a torch or lantern are pretty vague in BX as are the detriments of darkness (the below taken from Old School Essentials).

I think we can also infer a few other things about sight, light, and darkness from spells and monsters:
But anyone whose ever been in a cave, unlit alley, or dark basement knows that the need and desire for light is strong. So I would like to compress the above rules into a sort of toggle: With Light or No Light. This I think makes it easier to judge and incentivizes the PCs to use light sources:
WITH LIGHT
Vision: as normal up to radius
Search: +1
Suprise: on 2 in 6; can't surprise others
Encounter: begins at the radius
Combat: as normal up the radius
WITHOUT LIGHT
Vision: vauge impressions, large features
Search: impossible
Suprise: on 5 in 6; can surprise others
Encounter: begins at 1d6 (1-2 10', 3-4 20', 5-6 30')
Combat: cannot attack only grapple (or maybe -4 to-hit)
By Warren D. at September 12, 2020

MOON BASE BLUE by Ian Yusem